skip to main | skip to sidebar

A Workshop in Sedona 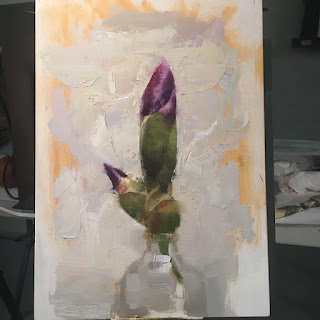 I am now officially rattled.

The first observation I made was that I do not draw enough. The second was that I rely on intuition and memory far too much. The third, and in my opinion the most important, is I had become quite complacent in looking. 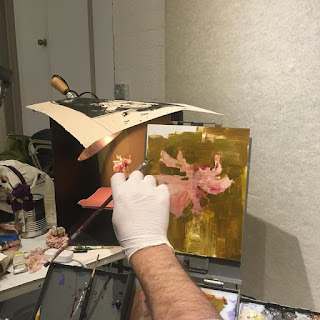 I do not believe it can ever be overstressed that when you are learning to draw, you are actually being taught to see. Yes, there is an amount of hand eye coordination that is involved, but the looking and seeing the edges and the shapes, the values and how they contrast, that is the trick. And, like all good things the trick takes hours, and hours of rigorously looking to train yourself to see.

I have said it before and I will say it again, if you love something enough you will struggle and strive to get better, and you will love the struggle. Maybe not every minute of it, but most of it. 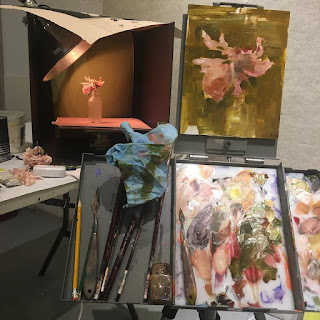 The timing of this workshop was very bad for me, because now I do not have the luxury of going into my studio and drawing for extended periods of time that require critically looking. I can only hope that in three weeks the dust has not settled too much.

Thank you Scott Conary for kicking the pegs out from under my cage and raising some dust.

Posted by C Tanner Jensen at 11:57 AM No comments: 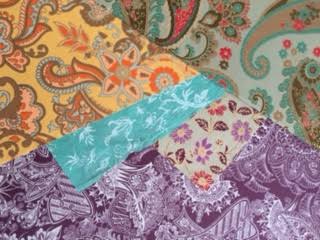 One of the things that happens to me in the studio is I have too many choices. This may sound good, but it keeps me from finishing something. I think of myself as a painter, but it's not really as straight forward as that.

I work on canvas, paper, prepared wood panels, yupo, and almost anything that doesn't move. I paint with oils, watercolors, and acrylics and often combine them. I create paintings, collages, cards, prints, and drawings.

I start a painting on canvas and suddenly the paper is calling to me. I pick up the charcoal and see the bright and sparkling pastels beckon. None of this would really be a problem if I would just stay on task.

In an effort to manage my time better, I decided to eliminate some of the choices. I have been going through my studio and selling items that are still very good, but that I will probably not use in the next year.

Gone are the dry artist pigments. The some of my vast collection of watercolors have found a new home. The pastels will be used by an artist in the Pacific Northwest and the etching ink is being used in the Big Easy. My art materials are fulfilling their intended purpose.

There are still shelves to be sorted through and boxes to be unopened, but I have managed to select what paper I will be keeping and what will be sold. Now to sell it so that I may start painting again.

Posted by C Tanner Jensen at 2:07 PM No comments: 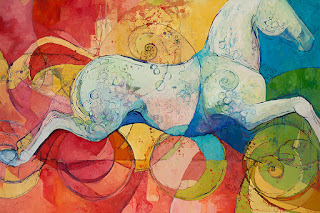 Inspiration is a funny thing. It is the beginning point. The place you start from and the place when I am finished I return to and ask myself if I held true to the inspiration or did I take a wild detour and land in a place far away from where I started?

My introduction to Lipizzaners was very typical. I was captivated by the Wesley Dennis's illustrations in Henry's book The White Stallion of Lipizza, I watched Disney's The Miracle of the White Stallions and I was smitten. I wanted one of those beautiful white horses that could leap into the air and preform capriole!

At this point if someone would have given me a 30 year old welsh pony I would have been over the moon.

When you're young, dreams and fantasy have not been dulled yet by the realities of life. Your imagination has no boundaries. Your heart knows how to sing and how to fly.

If this painting gives you a glimpse back to when you clutched at your heart when you look at a magical white beast leap into the air, then I held to my inspiration.


This painting is now being offered as a limited edition print.

contact me at ctannerjensen@gmail.com to purchase
Posted by C Tanner Jensen at 10:16 AM No comments: 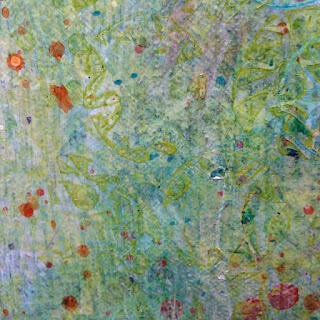 I work in a series of contradictions. I usually start with no idea of where I am really going. However, sometimes I start with a colour., and sometimes that colour changes. I always start a painting on canvas with an underpainting of colour washes. 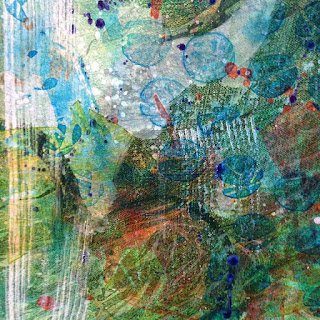 The colour washes are applied in thin layers. In places there will be one or two layers, in others there will be several. These washes start to build a landscape, a road map of lights and darks and of movement. They give direction  and are in no way indicative of the colour that will be applies over them.

Once this has been achieved  I spend a great deal of time looking at it from all angles. I place them upside down, sideways, and mix them up. Often times a triptych will become a diptych or a single canvas. 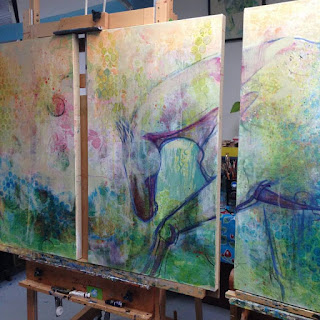 I search for the movement that suggests the figure that should be there. Once this has been established I can start painting.

Posted by C Tanner Jensen at 11:01 AM No comments: 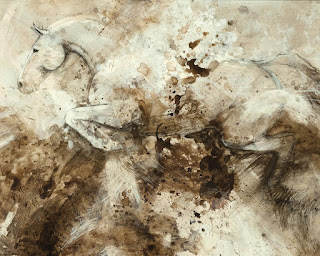 I had hoped to be going to n equestrian event with my art, but it just wasn't in the cards this year. I had printed a few extra of "Leap of Faith" and held back two of "In the Still" (only 5 were printed). Since I won't be going anywhere they are now available at my Etsy Shop The Superlative Horse. 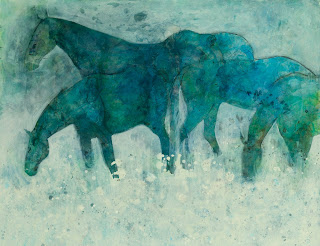 
Posted by C Tanner Jensen at 6:41 PM No comments: 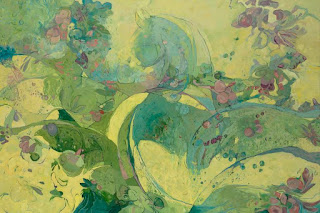 Why does anyone buy an artwork? The answers are as varied and as complicated as the people who made the purchases. However there is a common thread in most than a of the replies, "It makes me feel good."

When I create a painting it is like following that thread in the maze. It takes surprising twists and turns that lead me along. At the end it has developed in to a work that has it's own vibrational signature. It may be joy, or longing, vibrant and invigorating or calm and restful.The possibilities and combinations are endless.

Each individual who views the painting will see something, feel something a little bit differently and in some cases completely different.

This is what I call the Ruby Slippers Effect. It is your memories, your experiences, bits of you that are called forth when you look at a painting and feel something, or not.

I have brought forth a touchstone, a piece of art that causes you to pause, and reflect, and feel. You my dear are the one, you have the magic, and you had it all along.
Posted by C Tanner Jensen at 11:31 AM No comments: 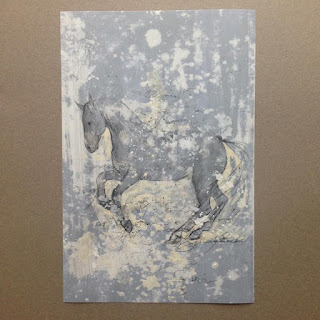 I love experimenting. I love the feeling of recklessness that I get from not know if what I am about to do will work or if it will end up in the dust bin. 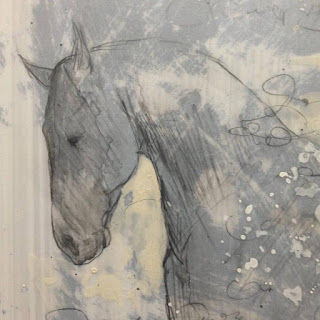 I started with a drawing in water soluble graphite. Next I went in with acrylic paint and water, nothing to risky there. I wanted some darkness and I wanted it coming from underneath what I had already finished, so I flipped the piece of yupo over and work on that side. 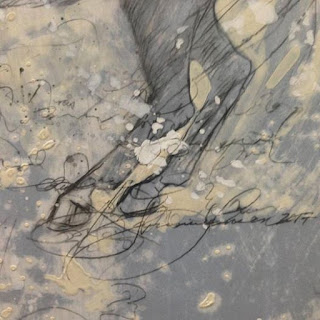 I am very pleased with the out come.

Posted by C Tanner Jensen at 10:49 AM No comments:

If you are interested in purchasing an artwork please contact me at ctannerjensen@gmail.com and please visit my my website wwwtannerjensenfineart and my Etsy store at www.etsy.com/shop/TheSuperlativeHorse
I accept Visa and MasterCard as well as PayPal.
Thank you.